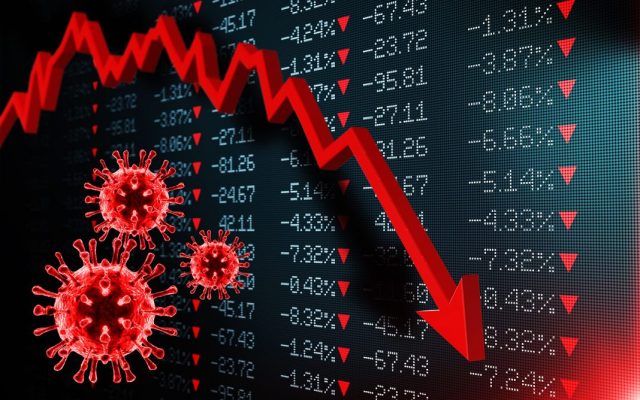 News emerged today that the UK economy shrank at the fastest monthly rate on record in April as yesterday mass sell-offs led to global stock markets suffering their worst day since Europe went into lockdown in March.

Figures released today by the Office of National Statistics revealed that the UK’s gross domestic product (GDP) fell by over a fifth in April compared with March, a drop of 20.4 per cent, representing the largest contraction since records began in 1997 and a drop three times greater than the decline seen during the whole of the financial crisis of 2007-09.

Earlier in the week the Organisation for Economic Co-operation and Development (OECD) had predicted that the UK was likely to suffer the worst economic damage from the Covid-19 pandemic of any country in the developed world in 2020.

Global stock markets also plunged on Thursday as concerns about a second wave of Covid-19 infections and a slower economic recovery than previously thought renewed investor fears over the impact of the pandemic.  The FTSE 100 fell 4 per cent while the Dow Jones Industrial Average fell by 1,861.82 points, or 6.9 per cent – its worst day since mid-March.

The pan-European Stoxx 600 index also fell by 4 per cent on Thursday, following an announcement by the US Federal Reserve that US GDP could fall by as much as 6.5 per cent in 2020, denting hopes of an immediate “V-shaped” recovery.  The Stoxx quickly recovered in early trading on Friday, however.

In the UK, the ONS figures revealed that virtually every sector had contracted in April, during a full month of lockdown with extensive business closures and restrictions on consumers leaving their homes.  The only sector that grew in the three months between February and April was public administration and defence, at a rate of 0.2 per cent.

“April’s fall in GDP is the biggest the UK has ever seen, more than three times larger than last month and almost ten times larger than the steepest pre-Covid-19 fall,” said Jonathan Athow, deputy national statistician for economic statistics at the ONS.

“In April, the economy was around twenty-five per cent smaller than in February.

“Virtually all areas of the economy were hit, with pubs, education, health and car sales all giving the biggest contributions to this historic fall.

However, he told the BBC’s Today programme: “It’s highly likely April will be the low point.

“Our own surveys and wider indicators have suggested a pick-up in economy activity, but I think it’s really too early to know how quickly economic activity will recover in the coming months.”

Following the publication of the figures, chancellor of the exchequer Rishi Sunak said: “In line with many other economies around the world, coronavirus is having a severe impact on our economy.

“The lifelines we’ve provided with our furlough scheme, grants, loans and tax cuts have protected thousands of businesses and millions of jobs – giving us the best chance of recovering quickly as the economy reopens.

“We’ve set out our plan to gradually and safely reopen the economy.  Next week, more shops on the High Street will be able to open again as we start to get our lives a little bit more back to normal.”

April’s GDP decline of 20.4 per cent dwarfs the fastest contraction during the financial crisis, which was a monthly fall of 1 per cent in March 2009.  It also far exceeds the drop of 5.8 per cent this March, which was the previous record fall.

In the three months to April, the UK economy contracted by 10.4 per cent.  This is by far the largest quarterly decline since these records began in 1955 and reduces the real value of goods and services produced in the UK to 2002 levels.

Suren Thiru, head of economics at the British Chambers of Commerce, told the Financial Times that “any prospect of a ‘V-shaped’ recovery remains unlikely, with many sectors continuing to operate at reduced capacity”.

Andrew Wishart, UK economist at consultancy Capital Economics, said: “Having plumbed those unprecedented depths, the economy is now on the return leg.  But the recovery will be a far more drawn-out affair than the collapse.  While the trough in activity is now behind us, the fiscal cost of the collapse and the rise in the unemployment rate to over 8 per cent that will result are only just starting to emerge.”

James Smith, economist at investment bank ING, said April’s GDP figures were “shocking”.  With some social-distancing measures set to remain in place even when business reopen “many firms will be operating below normal operation levels for the foreseeable future,” he warned.

Economy shrinks by a fifth amid more market turmoil