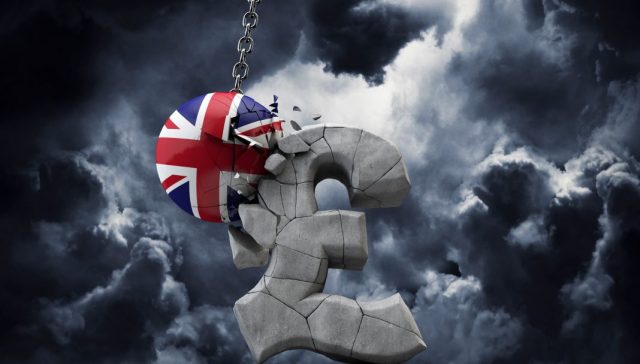 The Bank of England has downgraded its forecast for UK economic growth, citing both a weaker global outlook and Boris Johnson’s Brexit deal as major contributory factors.

In the last meeting of the monetary policy committee (MPC) before the general election, the Bank also elected to hold interest rates at 0.75%.

In a move that may be deemed politically sensitive given the timing, the Bank has modelled the impact of a specific Brexit scenario for the first time, projecting how the deal recently cut by Mr Johnson in Brussels will affect the UK economy – and the conclusion is that the UK will be worse off than under its previous forecast, which modelled a mix of Brexit deal outcomes and anticipated the impact over a larger timescale.

The forecast growth of the UK economy for next year has been reduced by 0.1 basis points to 1.2 per cent, and, by 2022, the economy will be a full 1 per cent smaller than had been previously projected in August.

Johnson’s new Brexit deal, which is ultimately expected to take the form of a Canada-style Free Trade Agreement, was responsible for around a third of the downgrade.

In the first split vote since June last year, two members of the MPC voted to cut interest rates to 0.5 per cent to mitigate the Bank’s more pessimistic outlook, arguing that Brexit uncertainty may persist and that the labour market seemed to be on the turn.  The Bank explained that

“there were downside risks to the MPC’s projections from a weaker world outlook and from more persistent Brexit uncertainties affecting corporate and household spending.  As a result, [the two dissenting] members judged that some extra stimulus was needed now to ensure a sustained return of inflation to the target.”

Sterling, which has risen by 4 per cent since August as the risk of a no-deal Brexit has diminished, fell by 0.25 per cent as markets digested the surprise news of a split MPC vote.

The Bank’s new forecast now assumes that most of the impact from the imposition of new trade barriers with the EU and the wider world will be felt within three years, rather than a “smooth transition” taking place over many years.  This more than offsets the expected 0.4 per cent boost to GDP over the three years to 2022 that will result from the £13.8 billion increased public spending announced by Sajid Javid in September.

There were also indications that the Bank may cut interest rates soon, particularly if Brexit uncertainty isn’t resolved promptly.  The minutes of this week’s meeting said: “if global growth failed to stabilise or if Brexit uncertainties remained entrenched, monetary policy might need to reinforce the expected recovery in UK GDP growth and inflation”.

Economic forecasts by the Office for Budget Responsibility expected to be published today were due to reveal that the UK’s public finances have deteriorated over the past eight months, but were blocked only an hour before their publication by the government’s top civil servant, Cabinet Office chief Mark Sedwill.  Mr Sedwill told the OBR chairman, Robert Chote, that the publication of the figures would break electoral guidelines.

Inflationary pressures are still set to build towards the end of the three year forecast, with inflation set to rise slightly above the Bank’s 2 per cent target in 2022, but in the near-term the inflation rate is likely to fall sharply – the Bank predicts a rate of around 1.25 per cent early next year – due to planned cuts in regulated utility bills.

“The Bank of England remains concerned about limited upside to capacity.  A relatively smooth transition to new UK-EU relations, coupled with a removal of some of the current global headwinds, could therefore see interest rates start rising earlier than markets currently anticipate.

“However, with the final UK-EU trade deal likely to take some time to conclude, uncertainty is likely to last longer, causing business investment and overall economic growth to be more muted than what the BoE is expecting at the moment.”

Dr Kerstin Braun, president of Stenn Group, fears the UK economy could be ‘running out of gas’ after several years of Brexit uncertainty: “Mark Carney is right to hold rates for now.  Brexit and trade worries have been weighing on the economy and now a snap general election has been thrown into the mix.  But even if we avoid a Brexit crash out, or if Brexit is scrapped all together, the UK is slowly running out of gas, driven down by persistent uncertainty and the flagging global economy.

European stocks might be up after some tariffs have been rolled back, but it will take time to undo the damage caused by the trade war.

“The MPC has been hinting at a rate cut for a while, with or without a confirmed Brexit deal, but it’s likely to be at least three more months of paralysis before we see a move.  Business investment will consequently be lacking, and thus no resulting lift to the wider economy.  Sterling will likewise muddle along.

“This limbo is starting to feel like ‘the new normal’ when it should only be temporary.  UK businesses need to be able to withstand the burden of this longer wait.”

What Are The Main Concerns With The IR35 Off-Payroll Rules?

Nearly a third of UK employees considering freelance work in 2021

HMRC chief dodges questions over its own contractors’ tax affairs

Running your own business