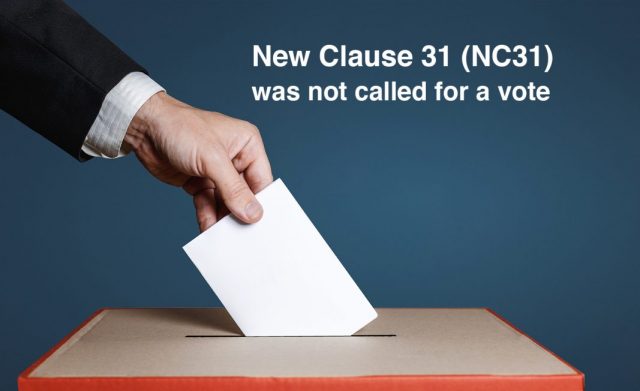 Labour came under fire from the freelance sector on Wednesday night after abstaining from a crucial vote on an amendment to the Finance Bill that would have limited the scope of the controversial 2019 Loan Charge.

The amendment, New Clause 31 (NC31), tabled by Conservative MP David Davis, would have meant that the Loan Charge only applies before the 2015-16 financial year in cases where the taxpayer knew that their loans should have been declared as income, but deliberately did not include them on their tax return – in effect limiting the retrospective nature of the levy to only apply in cases of deliberate tax evasion.

However, due to Labour being whipped to abstain on NC31, even in spite of Labour leader Sir Keir Starmer receiving an email from a desperate taxpayer who said they were “ready to end their life” if Labour didn’t support the amendment, and with the Conservatives likely to vote overwhelmingly against it, the amendment was not moved and thus did not even make it to a vote.   Another amendment, New Clause 1 (NC1), tabled by the Scottish National Party (SNP), calling for a report on the effect of the Loan Charge, was defeated by 321 votes to 232.

Another amendment of significant relevance to the freelance sector, that would have seen the delay of the extension of IR35 reforms, also known as the Off-Payroll rules, to the private sector for further two years until 2023-24, was also voted down by 317 votes to 254.

The Loan Charge has reportedly led to affected taxpayers committing suicide, a matter raised by David Davis: “​The loan charge destroys lives.  To date, at least seven people have taken their own lives as a result of this unfair and retrospective policy.”

Financial secretary to the Treasury, Jesse Norman, replied disputing that HMRC was responsible, in at least four such deaths: “The circumstances surrounding those deaths have been considered by the coroner, the Independent Office for Police Conduct and HMRC’s own internal independent investigations.  None of them has suggested, in these four reports, that HMRC is to blame for these deaths; no conduct issues have identified either by the independent office or internal investigations that would warrant disciplinary actions.”

Extraordinarily, when Ruth Cadbury, co-chair of the Loan Charge All-Party Parliamentary Group (APPG) and Labour MP for Brentford and Isleworth, asked to interject, potentially to question the minister on HMRC’s culpability in the remaining three deaths, Mr Norman denied her the opportunity, telling her: “I am afraid that I just have to press on, because I have no time.”

On a day that Parliament had condemned China for introducing a new security law in Hong Kong, which “will have a chilling effect on democracy”, commentators lambasted the House of Commons for failing to vote on Loan Charge amendment NC31.  Sir Ed Davey, co-chair of the Loan Charge APPG and acting co-leader of the Liberal Democrats, tweeted: “Been lobbying Speaker’s Office for a vote on NC31 on #LoanCharge.  They now agreed that if SNP don’t push their amendment, we can get a vote on loan charge.  Trying every trick in the book to get a vote on the #LoanChargeScandal.  Alarmed at how Parliament is preventing this vote.”

Greg Wright, deputy business editor of the Yorkshire Post, who has been highly critical of the policy, replied to Sir Ed: “As you all know, I’m not personally affected by this issue.  But I feel physically sick watching this.  If there is no vote, what’s the point in Parliamentary democracy?  A dark day.”

Wednesday night’s session in the Commons is the clearest signal yet to contractors that the Loan Charge will remain in its current form, and that the Off-Payroll rules can be expected to be implemented in the private sector as planned next April.

The Loan Charge Action Group (LCAG) responded: “Very sorry to announce that cross-party NC31 was not called for a vote.

“Extraordinary considering that there were over 50 MPs on it.  Thousands of people will feel badly let down by the House of Commons tonight.  We hope that the House of Lords will raise the Loan Charge now.”

Keith Gordon QC, an expert in and key critic of the Loan Charge, tweeted: “I fear that the loan charge amendments are now dead.  I am so sorry.

Despite all the efforts of [Sir Ed Davey] the executive is riding roughshod over the will of the people and the will of Parliament.  This is a very sad day indeed.”

In respect of the IR35 reforms, the Stop The Off-Payroll Tax said: “It is very disappointing that after four years of campaigning we have not achieved the primary aim of stopping this legislation.

“We, and our 4,000 campaigners, did everything we could – and the Lords report, from their inquiry into the so-called reforms, accurately detailed the damaging effect these changes will have on the UK’s flexible workforce.

“We are delighted that MPs tabled amendments to the Finance Bill, to prevent the damage, but sadly our MPs chose not to back them in sufficient numbers.”

IR35 consultancy Qdos Contractor said: “IR35 reform in the private sector has effectively now been signed off and will arrive in April 2021.

“Despite concerns raised by a number of MPs, who rightly exposed the flaws of this legislation and made it clear they do not believe changes are necessary, it seems there’s no turning back now.”

One contractor tweeted the Labour Party: “What did you get in return for your abstinence of NC31?  I want to know what noble cause my life is being put under the bus for.”

The next stage of the Finance Bill is the third reading in the Commons, after which it will be scrutinised in the House of Lords before the final consideration of amendments.